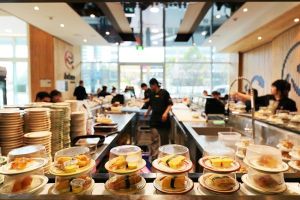 In November 2013, SydSol was contacted by a restaurant worker who had been seriously underpaid. Haruki* was an international student who had worked at one branch of a large restaurant chain* for nine months, and for the entire length of his employment was paid well below the minimum wage.

Under the Restaurant Industry Award, which sets the minimum wages for the industry, a casual cook such as Haruki should have been earning at least $21.86 per hour – his payslips, however, showed rates of $16 per hour. On Saturdays, the minimum rises to $26.24 per hour, but Haruki’s pay was only $17 per hour. And on Sundays he was paid at $18 per hour, a whopping $12.61 per hour below the minimum rate. All told, Haruki was cheated out of almost $4,500.

After discussing the matter with Haruki, SydSol agreed to support him in taking action to try to reclaim his lost wages. On 16 November, eight members and supporters of SydSol marched into the restaurant where he had worked. We presented a letter to the restaurant’s manager stating that unless full backpay was provided to their former staff member within 14 days, we would commence escalating protest action.